What is a Voluntary Administration?

A Voluntary Administration (VA) exists to provide for the business, property and affairs of an insolvent company to be administered in a way that:

What is the effect of a VA?

The effect of the VA is to provide the company with time and protection from creditors while the company’s future is resolved.

There is a stay of proceedings issued against the company and a restriction on owners and lessors recovering property used by the company. However, a creditor with a general security interest may enforce its security interest within 13 business days after receiving notice of the appointment (as required by the Corporations Act) or within 13 business days after the day the administration begins.

Will creditors be paid during the VA?

Creditors will not receive payment of unsecured claims during the VA as they are statutorily frozen. If there are sufficient funds available for creditors, dividends will be paid after the VA; during either the subsequent deed of company arrangement or liquidation.

Any debts that arise from the administrator purchasing goods or services, or hiring, leasing, using or occupying property, are paid from the available assets as costs of the VA. If there are insufficient funds available from asset realisations to pay these costs, the administrator is personally liable for the shortfall.

Who is in control of the company?

What is the role of the administrator?

The role of the administrator is to investigate the company’s affairs, report to creditors and recommend to creditors whether the company should enter into a deed of company arrangement, go into liquidation or be returned to the directors.

Can an alternate administrator be appointed?

A creditor who wishes to nominate an alternative administrator must approach a registered liquidator before the meeting of creditors, with a written consent from an insolvency practitioner, stating that they would be prepared to act as administrator.

What Are The Steps Involved in a VA? 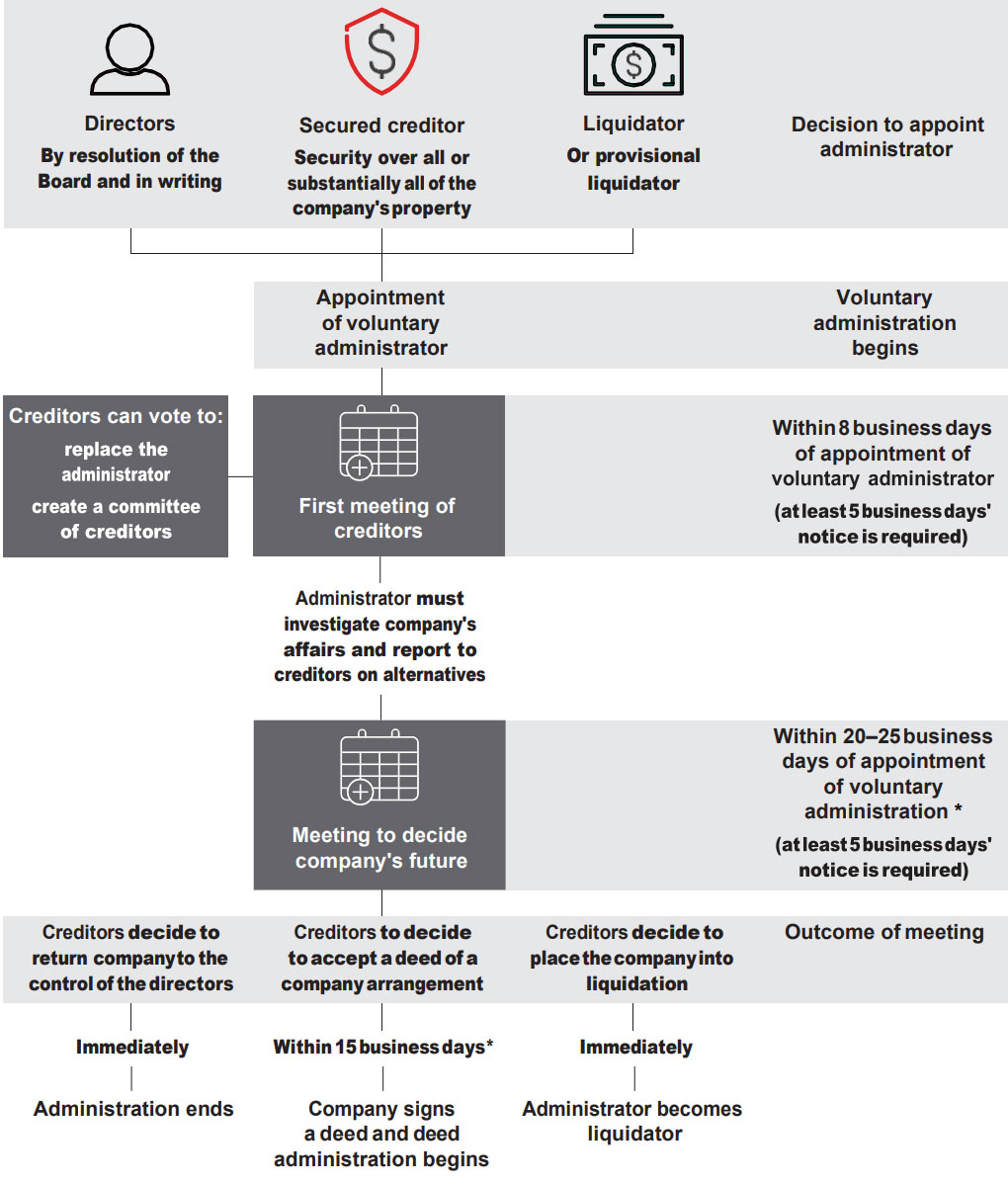 *Unless the Court allows an extension of time. Source: http://asic.gov.au/regulatory-resources/insolvency/insolvency-for-creditors/creditors-voluntaryadministration/

What information is given to creditors?

The administrator will notify creditors of the VA and convene the first meeting of creditors within three business days of the appointment.

The first creditors’ meeting is held within eight business days after the VA begins. The purpose of the first meeting is for creditors to decide two questions:

At the second meeting, creditors are given the opportunity to decide the company’s future. This meeting is usually held about five weeks after the company goes into VA (six weeks at Christmas and Easter).

In preparation for the second meeting, the administrator must send creditors the following documents at least five business days before the meeting:

The administrator is required to:

The administrator’s report should contain sufficient information to provide creditors with an understanding of:

Seeking early advice is essential to improve the likelihood of success in a corporate turnaround.

Our experienced advisors will assist you in taking the right path towards repairing the company’s financial and operational issues.

Our analysis of the company’s financial, operational and strategic positions will identify key areas for improvement and our experience in restoring stakeholder confidence will drive delivery of a successful outcome.